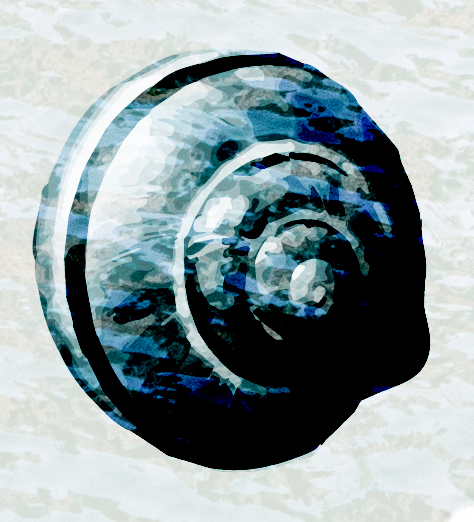 My father was killed in World War II shortly before my birth. My mother remarried when I was four. An aunt stayed with me while the newlyweds went on their honeymoon. As soon as their coach departed I ran into our big, lush garden, sucking my thumb and crying. In the wet grass under a drooping lilac bush were my snail huts, built with moss and sticks. Carefully I lifted one snail after another from its habitat and let it crawl across my hand and upon my arm, leaving its silvery mucus trail. I watched with fascination as their raspy tongues cut tiny blades of grass. I touched an antenna with its pinprick eye and the feeler retracted, only to reappear when I pulled away. I had counted the age of my large brown snails and of the smaller colorful ones by the whorls on their houses. Some had only a few rings, others up to twelve. Most of all I loved the snails’ ability to carry their houses on their backs, never having to reside in one location. My mother had given me a picture book about snails that described many of their habits which I then observed on my own. I learned that in the fall they closed their doors against the cold with a membrane made of calcium carbonate and protein. On the day of my mother’s departure with her new husband my little companions were a great comfort to me.

I had rarely seen my stepfather before the wedding. He was a military man and had maps of Europe spread out all across his massive oak desk. I did not like him being with my mother but she explained, “You need to get used to your new father. Do something nice for him.” When the couple returned from their trip I felt that my mother was not as close to me as before. Maybe if I did something nice for this stranger, everything would change back and, instead of being barred from their bedroom, I would be able to snuggle with my mother as before. One afternoon when the two of them went for a walk I gathered a jar of my most beautiful snails and brought them to his study. When I placed them at the edges of the maps they began to march like soldiers. A web of glossy paths soon crisscrossed the entire surface of the desk. I was delighted with my surprise and awaited my stepfather’s response. To his credit he did not scold me but instead sternly instructed me to gather up my little crawlers. “Snails are not pets.” My mother praised me privately for my “good deed” and, even though we now snuggled less often, I felt reassured.

I have retained a love for snails as creatures. And over time, they have also taken on symbolic meaning. They are survivors, knowing when to retreat and when to advance, cautiously — at a snail’s pace — probing, testing, learning.

Ute Carson has been a writer since youth. She has published two novels, a novella, three collections of poetry and numerous essays and short stories.