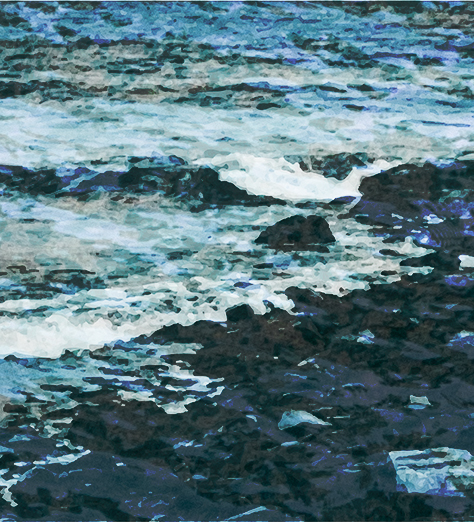 Great as in large, larger than the greedy sparrow, flick of seed,
and the mourning dove. Larger than the chickadee, white-capped, chipper.

We’re speaking of birds, you and I — a kind of communion. Something that binds.
How you learned their calls, their songs, as a girl. Would stop on the trail and say,
Listen, your right hand raised as if in benediction.

Times we ran into you as you stood, head cocked, knowing that you would never
see, but only hear them. Wanting us to hear, too.

These were never there — the wooded path with only shallow streams. No.
And so not seen, even from the shore, that eastern shore that served as guide:
south to north. And then across. And then back down.

No nest in trees or corner porch. No rousing from slumber in the pine’s innards.
Rather skim and waver, and plunge. And the shear of wing over deep water.

And now this. What we call a message. Or foreshadowing. Or the pulse
of what is still unknown. Their heavy bottoms no longer heavy, no longer great,
and the one man sitting on the beach, saying, Never before.

We read of it, you and I, and show some form of grief. Some sad shake of head
and glide of hand over table top and sigh.

Kelly R. Samuels lives and works as an adjunct English instructor near what some term the “west coast of Wisconsin.” Her work has appeared in PoetsArtists’s JuJuBes, online at apt, Off the Coast, and Cleaver, and is forthcoming in Kestrel.

← Everglades at Dusk
The Magic Rectangle →