In Depth: An Interview with Marcus Speh

Posted on 10 July 2017 by sarahkatgibson

“Gisela closed the book, put out the candle and opened her face to the dark. There was so much out there, so much to know and see, that it was tempting to close her eyes to it all.”

As an avid reader, I am often curious about the writing process authors use and what inspired them to write. So I was very pleased to find answers to these questions and more when I had the opportunity to interview our own Marcus Speh, author of the newly released Gisela: Princess, Empress, Abbess, Saint. I hope you enjoy Speh’s insight into the world of writing and please feel free to share it, contemplate it, and start up a conversation.

Folded Word: What inspired you to start writing and to write “Gisela?”

Marcus Speh: I think the real reason why I paid special attention to Gisela’s story was

that my daughter was at the same age as Gisela at the beginning of her official story, as a princess. This made me look at my daughter in a new light. She also accompanied the first draft of many of Gisela’s stories by making drawings for them.

I was moved when I first heard of Gisela’s fate: a German princess, married at age 10 to a tribal chief, who, as the first queen of Hungary, a small country sandwiched between the Christian and the Muslim world, shaped all of Europe for the next millennium. She was too important to be forgotten.

At the time, I had only written flash fiction: I was pretty confident scribbling stories of 500 to 1000 words. I wanted to work on a larger canvas but I didn’t know how to do it. This is when Gisela came to the rescue: her story, I felt, needed to be told. I thought that, because of its almost mythical distance, it could be told as a sequence of linked flash fiction pieces. Each of them not quite a short story but as a whole much more than a short story collection. I hoped that Gisela’s own tale would turn my patchwork into something larger, more coherent, an account of her whole life.

IMAGE: PRINCESS GISELA AS A GIRL, DRAWING BY AUTHOR’S DAUGHTER; BY SPEH (OWN WORK) [CC BY-SA 3.0].

Folded Word: Because “Gisela” is nonfiction, what kind of research did you do and how long did you spend researching during the writing process?

Marcus Speh: Gisela is not nonfiction in a genre sense – the book is fictional prose,

though Gisela herself is not fictitious. She lived and breathed as much as other personages of that time but her life has a particular romantic quality to it – romantic in both meanings of the word: characterized by great love, and rich with elements of a fairy tale.

As for research, I spent more or less one year reading books about that time and searching for specific sources. There was very little available. Most historical accounts only mentioned her as the consort of her husband, St. Stephen, though everyone agreed that she was a very special lady. In the end, I corresponded with one scholar in Hungary to make sure that I had not overlooked any major sources.

That research phase was not strictly separated from fiction-making though: whenever I found out something interesting that triggered an image or a scene, I wrote it down as flash fiction. I posted about 100 of these flashes on a blog alongside a medieval image or one of my daughter’s drawings.

Folded Word: What were the biggest challenges you faced while writing “Gisela” and what are some victories that you have had?

Marcus Speh: After I had finished 100 or more stories (at the end of 2011), I began to realize that I might have the backbone of a biographical novel. It was a challenge to turn the collection of flashes into a coherent whole. The result bears some stylistic resemblance to early English novels – think “Sir Ivanhoe”: the rising and falling action does not come from my imagination but from Gisela’s life. It rises and falls in a life-like way, unlike the action in a modern novel. It is truly novelistic in that the narrative follows not just a few but dozens of characters. 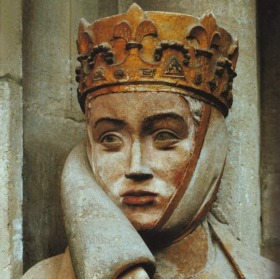 It leaves the path of the novel once more by only finishing the stories of a handful of characters, Gisela herself being the reader’s one constant companion. The novel thus underwent a number of iterations. In 2014, what I thought of as the last version had grown to almost 150 flash fictions, many of which were intended to draw a picture not just of Gisela’s life but of her age. The version that is published now has been pruned to focus more strongly on Gisela and her metamorphoses. I think of both the growing and the pruning of this bellyful of scenes as victories in the struggle for a final account of Gisela’s life and times. The good news: there is still a lot more to tell!

Sarah Gibson is Folded Word’s Publicity Assistant and Contributing Editor to its blog. She is a 21 year old from Laconia, New Hampshire and currently attends Gordon College. As a senior, she studies Communication Arts and enjoys spending her free time reading, writing, and eating.

One Comment on “In Depth: An Interview with Marcus Speh”