Posted on 19 August 2016 by sampriestley

In Whitby, North Yorkshire, England, the old ruined abbey on the hill overlooks the bay and pulls tourists up the 199 steps it takes to reach it, like the tide pulls the sea. The focal point of the town and a major tourist attraction, this ruined abbey was originally built in the 1200s and is an incredibly atmospheric ruined building to wander around, not least because it forms part of the backdrop for Dracula’s arrival in England in Bram Stoker’s classic.

But amidst the beauty of the imposing abbey and the views of the bay, is a small tucked away garden that barely anyone visits. Behind what is now the Abbey House Café and the youth hostel, is the old monastic garden. Thought to have been there since the 17th century and standing on what was originally the parlour yard of the abbot’s house, this small, beautifully kept garden holds onto its original character and focuses on medicinal plants and flowers.

A walk around the beginning of the garden reveals a small white framed greenhouse and a tumble of herbs planted in borders and haphazard pots scattered in a busy, ‘working’ way. A plaque gives some background on what this garden has been used for over the ages, with warnings that poisonous plants like foxglove, hellebore and monkshood can still be found here today and even dares you to find them…but warns to not eat them! Feverfew, Lungswort and Jacob’s Ladder can also be found here, offering relief for migraines, coughs, and nervous hysteria. 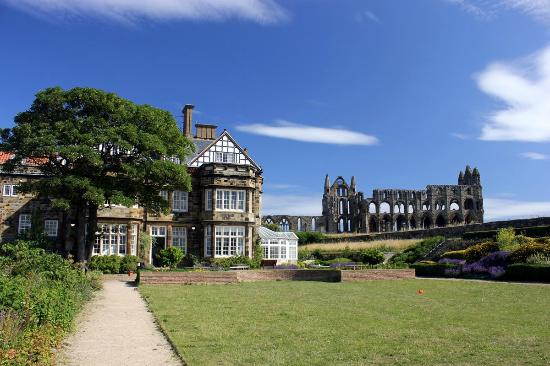 ‘The gardens around an abbey would have evolved over centuries and would have been undisturbed during times of war and violence’ the plaque tells us – a nod, perhaps, to the enduring nature and constancy of this functional and pretty little garden.

The spill of medicinal plants leads around to a beautiful lawn and low wall with picnic benches and stunning views. Though it feels more like an extension of the café today and is used for patrons to take tea on the picnic benches and sit by the pristine lawn, this is an historic feature of this landscape, as significant as the 199 steps and the 18th century church of Saint Mary that greets you when you first reach the top of the hill.

In-keeping with the gothic atmosphere of the abbey and the history of the abbot’s house, this garden serves to better illustrate what life was once like here. These plants are a living history of sorts, the only things that still thrive and live and grow exactly as they always have here. Although this garden would originally have been much bigger and would have included a kitchen garden of vegetables and orchard fruits, the abbey garden today still brings us a snapshot of life up on the hill and in the shadow of the grand looming abbey. Amidst the spirit of Dracula and life in and around the abbey, the monastic garden offers the scents and sights of nature…and a cure for your ills!

Samantha Priestley is the author of the Folded Word short-fiction chapbooks Dreamers (2014) and Orange Balloon (August 2016), which you can pre-order from our shop. She’s a novelist, playwright, and essayist who spins words into gold from her home in Sheffield, UK.