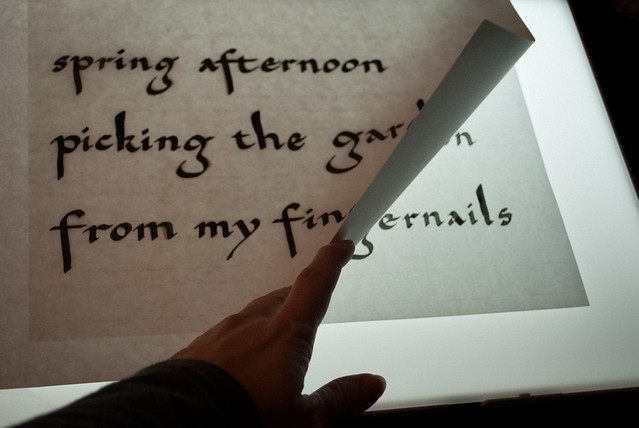 What is a Haiku?

Haiku is a short form poem that began in Japan several hundred years ago. It is widely written around the world today, and is perfect for our hard wired, fast paced tech life as it is short enough for Twitter and, when done right, can pull you in and linger for hours, days, and even years.

The thing about writing haiku is that they are so deceptively simple. Just because they are short does not make them easy to write. Most people make the assumption that a haiku is simply a short statement written in three lines that follow a 5/7/5 syllable count and leave it at that. Sadly, that is far from the truth. While poems in the 5/7/5 format are still written, the vast majority of those writing serious haiku outside of Japan have abandoned it completely. I don’t have time to get into all of that here, but, for the sake of this workshop, just put that out of your mind.

So what is a haiku, then, if not 5/7/5? The editorial staff at Modern Haiku, one of the most prestigious journals today, describe it like this:

“Haiku is a brief verse that epitomizes a single moment. It uses the juxtaposition of two concrete images, often a universal condition of nature and a particular aspect of human experience, in a way that prompts the reader to make an insightful connection between the two.” http://www.modernhaiku.org/submissions.html

The two are juxtaposed with a third image or phrase, which is referred to as the “cut”, and it is this key ingredient that takes the two main images and makes them pop. The “cut” can come at any spot in a haiku, and are easiest to illustrate when using a 3 line haiku format.

The following three haiku of mine, which are featured in my chapbook, Wasp Shadows, illustrate how the two image/cut format work.

In addition to this, I would add to this that haiku always take place in the present tense. They use plain language and always show and never tell. They also do not have titles, and don’t use personification nor metaphor.

Once you have your 10 or more images written down, go back over them and see if something looks interesting. See if there is a moment there that deserves more attention. Perhaps there are two images that go together. Or perhaps an image you wrote down strikes a chord with something else happening in life. Then start piecing together a haiku.

Here is what I came up with from my five images above:

first spring day
through the screen window
the budding lilac

Now you try. If you are stuck and don’t know exactly how to get going, first write down your images, then take a look at the following two haiku journals for lots of great examples of fine haiku:

. I will choose my favorite three. The selected haiku will be posted on this blog and the poets will receive a free print copy of my chapbook WASP SHADOWS. In addition, JS Graustein (Folded Word’s Editor in Chief) will randomly select one batch of haiku for a mini-critique by the editorial staff.

Entries are closed. Results were announced on this blog Thursday, 23 April 2015.